While not all GSDs will have health problems, there are particular types of diseases that are more common in GSDs than in other breeds.  While not solely in the shepherd, listed below are some of the diseases 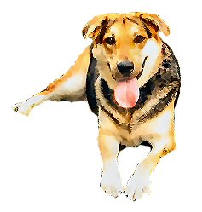 that seem to be more prevalent in the German Shepherd than in other breeds.  They are just some of things you should be aware of and know certain symptoms of if you hope to own a GSD.  In addition, most of these disorders are believed to be genetic in some way which means that GSD mixes (not just purebred GSDs) would be more prone to them than other breeds as well so owners of purebred GSDs as well as GSD mixes should be aware of them.

Degenerative Myelopathy is an autoimmune-based, progressive neurological disease affecting the spinal cord. It appears with relative frequency only in the German Shepherd Dog; therefore, a hereditary factor is likely but not yet proven. A general reduction in mobility starting in the rear of the dog is noted. DM is the apparent canine equivalent of Multiple Sclerosis in humans. It is usually associated with dogs over the age of 7. Minimal available treatments are supportive only.

Not all causes of convulsions or seizures are hereditary. However many affected dogs are thought to be genetically predisposed. Treatment's success is depending on the cause. Maintenance treatment can consist of scheduled Phenobarbital (relatively inexpensive) and occasional blood testing. 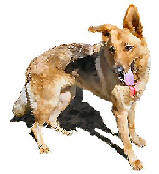 Bloat occurs when air, food, and fluids build in a dog's digestive tract. and the dog is unable to expel the gases. Often times, the stomach "twists" further complicating the situation. Once the stomach has twisted, both the entrance to the stomach (esophagus) and the exit (pylorus) shut down. With a decreased blood flow, toxins build rapidly destroying the stomach tissue. If enough pressure builds, the stomach can rupture, resulting in an infection of the abdomen or the twisted off parts of the stomach stop getting blood supply and it dies creating severe infection. The twisting also compresses a major vein that carries blood back to the heart. Other organs may also be compromised.

Technically, the occurrence is gastric dilatation-volvulus. It's onset is sudden and life threatening. Immediate medical attention is required ­ where immediate means right now, not after you finish dinner, right now. And remember, your local vet may not be open, and if they are open, they might not be staffed to handle a bloat emergency. Your best bet if you think your dog's showing signs of bloat is to head for the nearest animal emergency room; lights and sirens. Time is of the essence - you need to be at the vet within 30-60 minutes to have any hope of helping. One thing that's for sure: if you wait until the next morning, you probably won't have to worry about it; your dog will have died. About one third of the dogs who get bloat don't make it (that's about 30,000 a year).

However if you do get your dog to the ER fast, your dog's chances increase significantly as most dogs do well after surgery. At the Tufts University School of Veterinary Medicine, about 85 percent survive after surgery.

Bloat's signs:
1. Oddly restless after eating
2. Unable to sit down comfortably or lie down
3. Nervous pacing with a purpose
4. Retching in a futile attempt to vomit
5. A rounded, gas-filled stomach (some pet owners have been able to tap the stomach and hear a drum like, hollow sound)
6. Salivation and whining
7. Difficulty breathing
8. Rapid heartbeat (normal is 60-80 beats a minute)

What You Can Do To Prevent Bloat
Large chested dogs like German shepherds are prone to bloat. And is the case with most illnesses, it's better to prevent bloat than to fight it after the onset. The problem is that the cause of bloat is unknown.

This is a condition not exclusive to GSD's; it is found in many medium to giant sized breeds.  In fact, the prevalence in GSDs has been declining over recent years according to the OFA.  Dysplasia is largely caused by genetic predisposition, thought possibly to be affected by environmental factors (care & feeding) during a pup's development. Hip and or elbow dysplasia can be crippling, cause minor occasional abnormal gait, lameness, or produce no symptoms whatsoever depending on the severity. Hips do not form a normal "ball and socket" joint, and the resulting lack of correct cartilage formation and wear may create osteo-arthritic changes sometimes requiring medication or joint surgery depending on the case. Elbow dysplasia or "ununited anconeal process" is a condition which results from a fragment of bone that does not fuse as it should during the dog's development. Intermittent lameness can occur and surgery is sometimes required. X-rays of dog's hips and elbows are rated by the Orthopedic Foundation for Animals for the purposes of evaluating suitability for breeding. Passing dogs are given a rating and certified by the OFA. 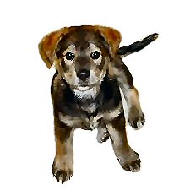 "Pano" is a developmental/growth condition of the long bone(s). It is not exclusive to GSD's and is found in large or giant breed dogs usually between 5 and 14 months of age. It can cause complete or partial lameness in any leg(s) for a number of days or weeks and then will sometimes appear in a different limb or recur after apparent recovery. Hence the common name for Pano: "wandering lameness."  Diagnosis should be confirmed by an x-ray, and treatment overseen by a veterinarian.  The vast majority of dogs affected make a full recovery with minimal extra care in a short time.  Basically, they out grown it.

This condition is apparently exclusive to GSD's. It is a non-curable but treatable disorder of the gastrointestinal tract often, but not always, accompanied by diarrhea and severe weight loss. It is diagnosed by blood test. The dog's pancreas does not produce the digestive enzymes required for the dog to absorb nutrition from normal dog foods. Prescribed digestive enzymes must supplement a specific diet at each meal throughout the dog's lifetime in order to maintain adequate weight and condition. The condition can be accompanied by a bacterial overgrowth requiring ongoing antibiotic treatment. Maintenance care is expensive and expected lifespan can be affected.

Pannus is a form of corneal inflammation that affects both eyes and occasionally can result in blindness. It is characterized by a pink membrane growing across the cornea. It appears primarily in GSD's and GSD crosses over the age of two. Steroids or surgery may be prescribed to treat the disease; it is something that can be controlled in most cases but it cannot be cured.

Fistulas are open draining tracts and sores in the perianal skin. They first appear as one or more "pinholes" in the skin surrounding the anus, with some exudate from the holes. The condition is most common in German Shepherds, but is by no means limited to that breed. Although the causes of the disease are still unknown, the current understanding is that it is probably an autoimmune disorder, much like Crohn's disease in humans. Treatments have changed /progressed greatly in the last two to three years. Currently, the most common treatments are medical regimes, using Imuran/flagyl, or cyclosporin, or topical tacrolimus. The website devoted to PF, which contains readable/printable veterinary journal articles

detailing studies of these treatments, including treatment dosages, and which has success stories and a list/support group, is http://members.tripod.com/~perianal-fistulas (beware of the many pop-ups on this site!). The disease is serious, and likely chronic, but with treatment many dogs live comfortably to old age, especially if it is diagnosed early.

Allergies in pets, are one of the most common causes of skin conditions. Allergies can be difficult to control and are chronic in nature. There are 3 main types of allergies in relation to skin conditions. It is possible for a pet to have a combination of all 3 allergy types: 1. Food Allergy; 2. Flea Allergy Dermatitis (FAD); 3. Atopy, or Allergic Inhaled Dermatitis.

Lupus is the classic example of a multi-systemic autoimmune disease. Often called the "great imitator, lupus can mimic nearly any other disease state. The signs of SLE may be acute (sudden onset) or chronic and are usually cyclic. A fluctuating fever that does not respond to antibiotics is one of the hallmark signs, as is a stiff gait or shifting lameness. Other signs may include a hemolytic anemia or thrombocytopenia, leucopenia (a low white blood count), or a symmetrical dermatitis, especially over the bridge of the nose ("butterfly lesion,").

Two other organ systems may be affected by SLE. Polymyositis, an inflammation of multiple muscle groups, causes gait abnormalities, muscle wasting, fever, and pain as well as the attitude changes one expects from a dog that hurts. A similar inflammation of the glomerulus, the functional unit of the kidney, produces a condition termed glomerulonephritis. This leads to protein loss in the urine and eventual renal (kidney) failure.

The prognosis for patients with SLE is guarded, especially when complicated by kidney disorder. Severe, generalized infections of the kidney (pyelonephritis), joints (septic arthritis), or bloodstream (septicemia) are usually non-treatable signs of advanced disease.

Thyroid disorders are found occasionally in the German Shepherd Dog. Most are highly manageable and the treatment is not expensive, though lifelong. Hypothyroidism can cause the coat to become thin, coarse, and brittle. The dog may become lethargic, very quickly obese and dull. A dog with mild deficiency may show little or no outward sign of it. Diagnosis is by blood test. Dogs with poor thyroid function should not reproduce, as this disorder is genetically linked and perpetuated. Untreated thyroid disorder is associated with several health problems.

This is the most common hereditary bleeding disorder in dogs. The bleeding is caused by a deficiency of a plasma protein that is critical for normal platelet function in the early stages of clotting. Diagnosis is by blood test. GSD's should be screened for this disorder prior to breeding.

You can also try this site - http://www.allgermanshepherds.com - For help in learning more about GSDs

Like all dogs, GSDs and GSD mixes have certain medical needs.  We sincerely hope that none of our dogs will develop any of these diseases or problems but we feel we must all be aware of them in order to help our dogs live the most pain free, happy, healthy lifestyles possible.  Knowledge and smart management will hopefully do you and your dog good.

Ways You Can Help